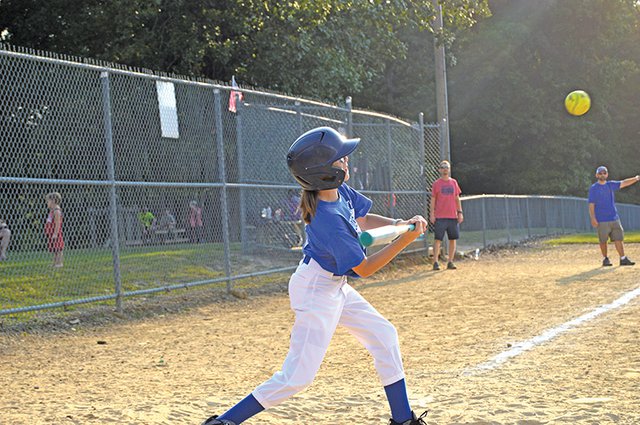 Citizens Tri-County Bank were in the money Tuesday night against Melton & Cowan Law Office in a Junior League game in Centertown.

The citizens wereted no time scoring 6 points. At the top of the first, Samara Harris and Emma Peacock started off with hits. After a walk from Alyssa Boyd, Conner Cantrell and Lorelei Griffith hit the infield to score Harris and Peacock.

Hayden Foster got a hit to right center fielder to score two runs, then Allie Eaton had one sacrificial ground to score another. Dalton Stalcup landed a hit down the middle to score one more.

Harris, at bat for the second time in the inning, hit a liner that was caught by Melton & Cowan shortstop Alton Womack to avoid more damage, 6-0.

Melton & Cowan got it right for 2 runs down the first. Lakelynn Garza led the way with a hit in the field. After Emma Dillon put the ball into play, Garza pushed her way around the goal and tried to get home, only to be hit by Cantrell in a spectacular play.

Melton & Cowan, however, was unfazed. Ashlyn Faulk got a hit in left field, and Dillon and Faulk scored when Jackson Kirby roped a right. The score was 6-2 after the first.

The citizens cashed a check for 10 more races at the start of the second. Harris, Boyd and Foster all had a hit in the inning, while Cantrell and Griffith each had two hits.

Melton and Cowan argued for two points late in the second, thanks to a hard-hit liner in center-right field from Tayden Stafford, a walk from Acelyn Stafford, and then hits from Garza and Dillon. The score was 16-4 after two.

The top of the third was marked by a major league catch in left center field by Maddie Barks of Melton & Cowan on a Harris ball. Then the Womack shortstop grabbed a Cantrell liner and then scored the second goal to pass Peacock there and get out of the inning.

Melton and Cowan added one more point before the final verdict was delivered. The game ended after four innings and the Citizens won 16-5. Kaylyn Bragg played a solid backstop defense for the Citizens.

The pandemic has widened the wealth gap. Should we blame the central banks?