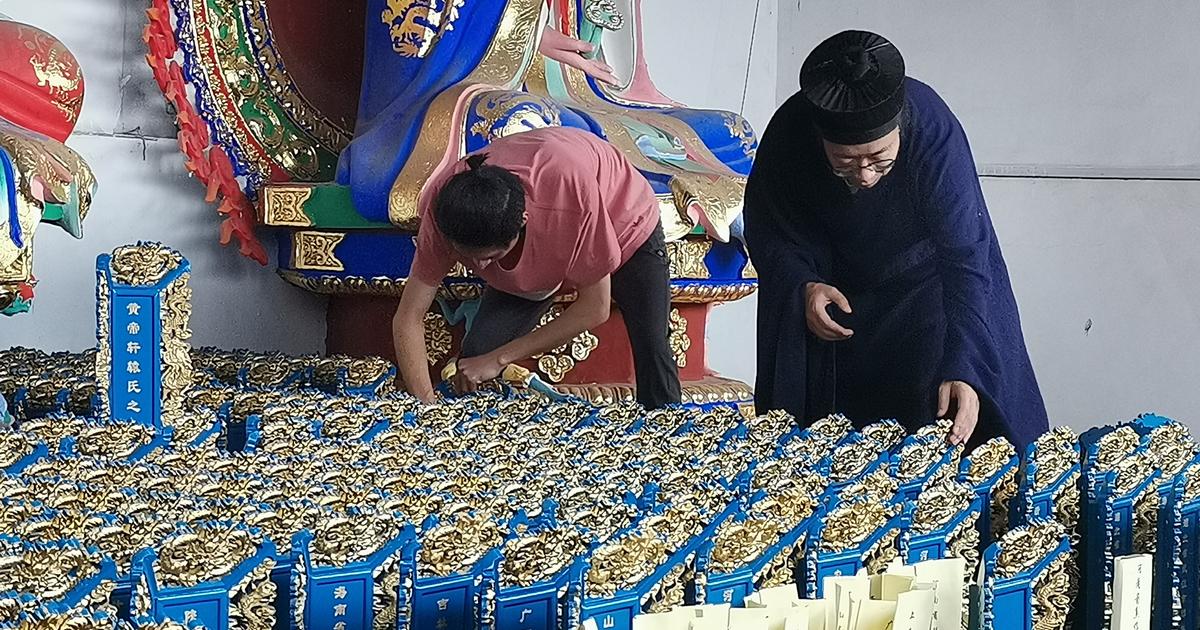 beijing — In a Taoist mountainside monastery in the east China there is a room with 558 carefully displayed memorial plaques, each bearing the name of someone who died with the coronavirus. Priest Liang Xingyang told CBS News he started collecting on Jan. 29, shortly after China’s central government confirmed that the virus that causes COVID-19 was spreading “from human to human” and shut down Wuhan, the city at the center of the outbreak.

Taoism is a religious philosophy with approximately 1,800 years of history in China, and a massive global following, which advocates humility, harmony and balance. The most recognizable symbols of Taoist philosophy are the interlocking teardrop shapes of Yin and Yang.

One of the five officially sanctioned religions in China, Taoism uses memorial tablets to give souls a place to rest after death, Liang said.

Coronavirus whistleblower Dr Li Wenliang is one of the names on a tablet in Jiuyang Palace, spread across a rocky hillside in Laiwu, China’s Shandong province. Other names are less well known.

“In the face of the pandemic, respect for life is the greatest universal value, and the value that we must pass on,” Liang told CBS News in a phone interview. “The spirit of these heroes goes beyond countries, ethnicities and religions.”

Jiuyang Monastery is home to a small community of priests who live, eat and worship within the complex. Other priests help Liang collect the names of coronavirus victims, collected from state media, and maintain the tablets daily.

Liang posted the full list of 558 “heroes” on his Weibo account, a platform similar to Twitter, where he has 3 million followers. It gives each victim the name, age, occupation, official cause and date of death, and whether they were members of the Communist Party.

The priest said that, given criticism from government officials for their handling of the pandemic, he wanted to show that there were casualties among the ranks of the ruling party, “to show the sacrifice they have made”.

Even this act, honoring former Communist Party members among many others, caught the attention of the government.

“A religious believer doing anything related to the Communist Party can be sensitive in China,” Liang said. There was initially some resistance from authorities to his idea, but he said the issues were resolved through discussion.

“The central government awarding heroes in the fight against the pandemic shows that we are on the same page,” the priest said.

There were questions about Liang’s motives from the start. Some on Chinese social media platforms have accused him of trying to profit from donations or trying to spread his religion. He even received death threats online.

“I don’t care what other people say about me,” Liang said. “I just want to focus on the right thing to do.”

To address concerns, Liang refused donations for the tablets and funded the project himself, using revenue from his jewelry store to continue producing the tablets. He said he had already spent more than 200,000 yuan, or about $29,250.

Liang said the memorial plaques bring great comfort to the loved ones of the deceased, as well as to himself. Some relatives visited the monastery to pay their respects. Most of them have not been able to see their loved ones in recent days, due to coronavirus precautions in hospitals.

“This is where they can say goodbye,” Liang told CBS News.

The priest and his project now receive much more support online.

“The hardest thing is to continue,” he worried to CBS News. “Once this disaster is over, will people still remember it?