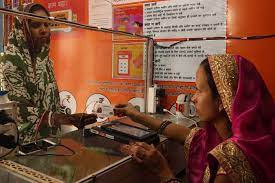 Chattrapur: The state government has engaged more than 230 Women Self Help Group (SHG) members as bank representatives to provide banking services to all rural households in each panchayat in Ganjam district. According to reports, a member of SHG women under Mission Shakti or an educated woman will be appointed as the representative of “Sakhi” bank in each panchayat to provide banking services to rural people. In the meantime, a process has been launched to appoint women as bank representatives. The move will help villagers access banking services close to home and women members will earn a living and become self-sufficient.

As part of the move, the named ‘Sakhis’ are receiving training at Union Bank of India’s Self-Employment Training Center in Chhatrapur. According to Saswat Kumar Sahoo, the Mission Shakti district project coordinator here, more than 230 members of women’s self-help groups under the state government’s ambitious Mission Shakti program are being appointed as representatives. of bank. Meanwhile, 74 members of women’s self-help groups have already started working as “Sakhi” while another 26 women have recently joined training at the training center.

Director Kishore Chandra Nayak of the training center presided over the inaugural ceremony and spoke in detail about the training program and its objectives. Ganjam District Senior Director (LDM) Ashok Panda said that banks cannot open branches in all places where women members of self-help groups are appointed as “Sakhi” bank representatives. They will act as a link between the banks and the villagers and provide banking services to the villagers in each panchayat. The nominated women will be assigned a room in their respective panchayats from where they will hold their office and do business with the villagers. Mission Shakti DPCA Namita Pradhan and Bank Branch Manager Nalini Ranjan Sahu were present at the function.