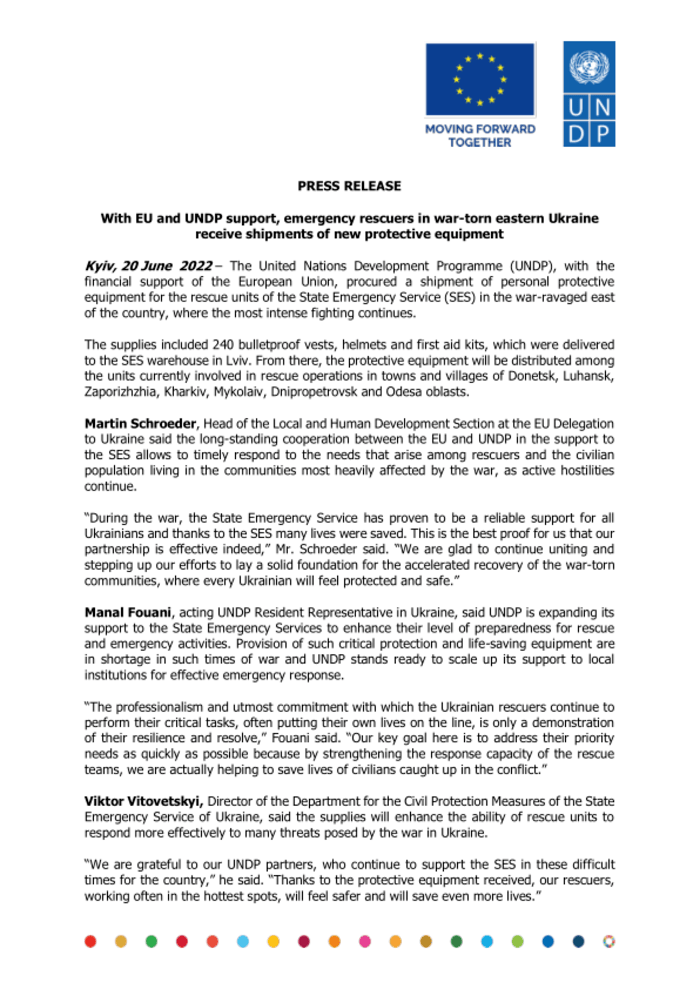 Kyiv, June 20, 2022– The United Nations Development Program (UNDP), with the financial support of the European Union, has purchased a shipment of personal protective equipment for the rescue units of the State Emergency Service (SES) in the war-torn east of the country, where the heaviest fighting continues.

The supplies included 240 body armor, helmets and first aid kits, which were delivered to the SES warehouse in Lviv. From there, the protective equipment will be distributed to units currently involved in rescue operations in towns and villages of Donetsk, Luhansk, Zaporizhzhia, Kharkiv, Mykolaiv, Dnipropetrovsk and Odessa oblasts.

Martin SchröderHead of the Local and Human Development Section of the EU Delegation to Ukraine, said that the long-standing cooperation between the EU and UNDP in supporting the SES enables timely response to the needs that are occurring among rescuers and the civilian population living in the communities hardest hit by war, as active hostilities continue.

“During the war, the State Emergency Service proved to be a reliable support for all Ukrainians and thanks to SES many lives were saved. This is the best proof for us that our partnership is really effective,” said Mr. Schroeder. “We are happy to continue to unite and intensify our efforts to lay a solid foundation for the accelerated recovery of war-torn communities, where every Ukrainian will feel protected and safe.”

Manal Fouani, Acting Resident Representative of UNDP in Ukraine, said that UNDP is extending its support to state emergency services to improve their level of preparedness for rescue and emergency operations. The supply of these essential protective and lifesaving equipment is lacking in these times of war and UNDP is ready to intensify its support to local institutions for an effective emergency response.

“The professionalism and utmost commitment with which Ukrainian rescuers continue to carry out their critical tasks, often putting their own lives on the line, is just a demonstration of their resilience and determination,” Fouani said. “Our main objective here is to respond to their priority needs as quickly as possible because by strengthening the response capacity of the relief teams, we are in fact helping to save the lives of civilians caught up in the conflict.”

**Viktor Vitovetskyi, **Director of the Department of Civil Protection Measures of the National Emergency Service of Ukraine, said the supplies will enhance the ability of relief units to respond more effectively to the many threats posed by the war in Ukraine .

“We are grateful to our UNDP partners, who continue to support the SES during these difficult times for the country,” he said. “Thanks to the protective equipment received, our rescuers, often working in the hottest spots, will feel safer and save even more lives.”

The total cost of the protective equipment and first aid kits is US$250,000 (UAH 6 million) and was purchased under the United Nations Recovery and Peacebuilding Programme.