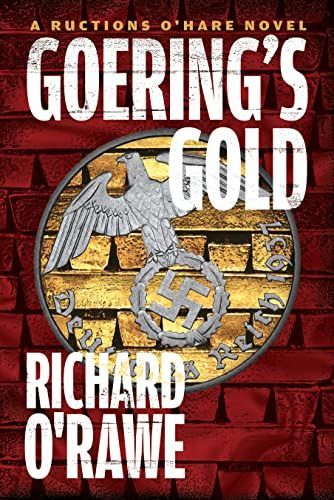 Preparing the plot for Goering’s Gold

Ireland is the treasure island. This is what Reichsmarschall Hermann Goering thought in 1944 when he realized that with the allies on Germany’s borders, the war was lost. It’s time for him to plan, to look to a world without the Third Reich, probably without the Führer, Adolf Hitler.

He would need a nest egg of gold if he was to survive, enough to grease the greedy palms of administration in countries beyond the horizon.

Sign up today to receive daily, up-to-date news and views on Irish America.

And so, Goering arranges the secretion of a shipment of gold to the neutral island of Ireland, after which he ensures that everyone who knows the location of the treasure is sent to the Russian front, never to be seen again. hear about it.

The idea for Goering’s Gold came to me while watching the TV mini-series “Nuremburg”. What caught my imagination was the fact that no one, to this day, knows for sure how Goering was able to trick the executioner into obtaining and swallowing a cyanide tablet, while being under 24-hour surveillance. If he bribed an American guard, which is the most popular theory, what did he use as collateral?

And so began the process of putting the bones of history together; tying together assumptions, breathing life and getting inside the heads of different characters, and letting those same individuals flourish and express themselves in their own unique ways.

And then there’s my protagonist, James “Ructions” O’Hare.

Ructions is a master criminal specializing in bank robbery, having previously (in my previous thriller ‘Northern Heist’) emptied the National Bank’s vaults in Belfast and got rid of over £32million. Yet even though he has enough money to last a dozen reincarnations, he is restless. He misses the risk-taking, the thrill of the plot, the excitement of putting together the perfect team for the perfect job, beating the cops, chasing the rainbow.

But, even for an antihero, life has its challenges, and they don’t always come from those in uniform. O’Hare’s partner, Eleanor, does not share his craving for adventure and bravery. Far from there. She is the ex-wife of a banker, an upright and independent woman who wants a normal life, a life that is not polluted by roving gangsters, neo-Nazis, IRA figures and cops. All enter its space, the space of Ructions, and all in the hope of finding the treasure.

During a recent interview, I was asked why Ructions is so attractive given that he is an outlaw and a man addicted to crime. The interviewer pointed out that it’s not like Ructions is like the good Robin Hood. For rather than giving away his ill-gotten spoils to the poor, as was Robin’s habit, Ructions even gambles on the stock markets in hopes of increasing his personal wealth.

It’s an interesting question, and in the ensuing discussion we concluded that there is something in the human psyche that roots for the underdog – even if that underdog is a brigand.

As for my switch from the factual and biographical books I started out with to these detective story exercises, well, I found it quite simple to make this change. While I would like to say that the change came about because of a deeply illuminating process, the reality is that I barely thought about it.

Fiction writing felt like a natural progression to me, the final leg of a happy, happy bus-tour. Indeed, bringing Ructions and his co-workers to life in “Northern Heist” wasn’t that difficult for me as I already had an idea of ​​how to rob a bank, having robbed a few in my time, and having spent eight years in the Long Prison of Kesh for thoughtless work in an IRA bank, over which I had had no control. However, I don’t rob banks anymore – not even for the IRA.

I’ve often been asked what advice I would give to budding writers. I’m still uncomfortable answering this question because I’m far from an expert in book writing and I don’t have precise and quick answers.

I will say first of all that any writer must be prepared for rejections. All of my books were initially rejected by publishers. And, second, you must be willing to change the scripture when good advice comes your way. I think back to how my literary agent kept sending “Northern Heist” and how it kept coming back rejected, over and over again. I was out of breath.

Then one day at the Duke of York, a small pub in downtown Belfast, my daughter Bernadette and I were discussing the book’s failure to pick up. Out of the blue, she hit me with, “Do you know why it’s not picked up? You killed Ructions. Why did you kill Ructions?”

Finally, I realized that Bernadette was right. So I rewrote the entire second part of the book. It was snapped up by the first editor it was sent to.

Bernadette taught me a valuable lesson. It’s good to talk, but sometimes it’s even better to listen.

“Goering’s Gold” is available on Amazon