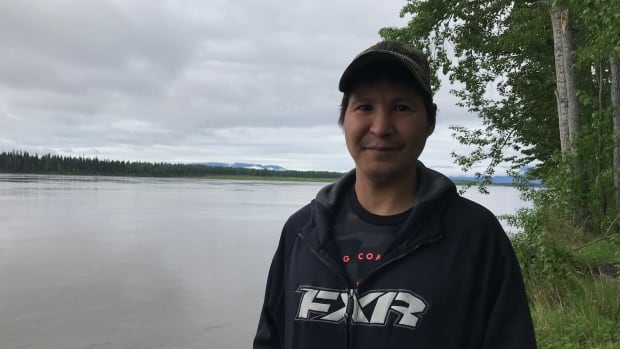 Nahɂą Dehé Dene Band Chief Steve Vital’s message to his community on the banks of the flooding South Nahanni River is to hope for the best, but prepare for the worst.

And the people of Nahanni Butte, Northwest Territories, took that message to heart.

The South Nahanni River rose two to three inches overnight and on Saturday morning, Soham Srimani, the community’s band manager, said it was a good sign – compared to larger increases in recent nights. A water monitoring bulletin issued Friday evening indicated that the flow of the Liard River had increased steadily over the past two days.

“We’ve been through this before, so it’s pretty familiar,” said Jayne Konisenta, band councillor, fuel service contractor and lifelong resident of Nahanni Butte. She began to prepare for a possible flood when she returned to the community after a trip to Yellowknife on Wednesday.

“I’m lucky to live in a two-story house, so I moved everything upstairs.”

Konisenta also cleaned up her yard and said she closely monitors the fuel tank farm she manages. If the community is ordered to evacuate, she said she would give people the opportunity to stock up on diesel and gasoline before closing the valves and stopping service.

“I think we have to move to higher ground. Because if it’s going to continue, it’s frustrating for the community to do that every year,” she said, noting that residents have also prepared for the floods last year.

Standing at the water’s edge at Liard River Crossing, Jonathan Konisenta, Jayne’s son, said he was pretty sure the water would rise much higher than it has already.

“There is still a lot of snow in the mountains. According to the forecast, it will rain, I don’t know for how many days. It will be quite interesting to see,” he said.

The Liard River Bridge is a critical point in the community. Besides flying, the only other way out of town is to drive 10 minutes to the railroad crossing and cross by boat, where another road joins Highway 7.

On the Nahanni Butte side of the Liard River, the road leading to the crossing is flooded, but it is still possible for boats to enter the water. Chief Vital said an evacuation would be triggered if water covered the access road between the community and the crossing, compromising the ability to leave by boat.

Vital said the Northwest Territories Department of Municipal and Community Affairs will transport seniors and people without transportation across the Liard River to Fort Simpson, if an evacuation is ordered.

He said the band would also help people cross the Liard River to their vehicles, if needed, and people are well aware of the evacuation plan – unlike just over a decade ago.

Nahanni Butte was ordered to evacuate due to flooding in 2012.

Residents were kept away from the community for about three weeks, and Jayne said the order was sudden and unexpected. Her son was among those who remained.

“I was here for about 10 days, just a little too much community watch and dog watch and stuff. I just tried to watch the house mostly,” Jonathan said.

Jonathan said the water in 2012 peaked about a foot from the foundation of his family’s home, but they lost tools, snowmobiles and a vehicle that was sitting in the yard. This time, he noted, he is getting ahead of the preparations.

There is a low point in Nahanni Butte, opposite the teachers’ cabin. A stake in the water, with strips of orange tape wrapped around it, shows how the water in the South Nahanni River continues to rise.

The Nahɂą Dehé Dene Band closely monitors the water there.

On a utility pole opposite the powerhouse, similar strips of tape mark the point at which the Northwest Territories Power Company would shut off the water – a foot below the facility’s ground.

“I’m telling everyone here that a flood may be going to happen, but hopefully it won’t,” Vital said, attributing the situation – the same way Jayne did – to climate change.

RBL Bank’s new CEO R Subramaniakumar has many challenges ahead