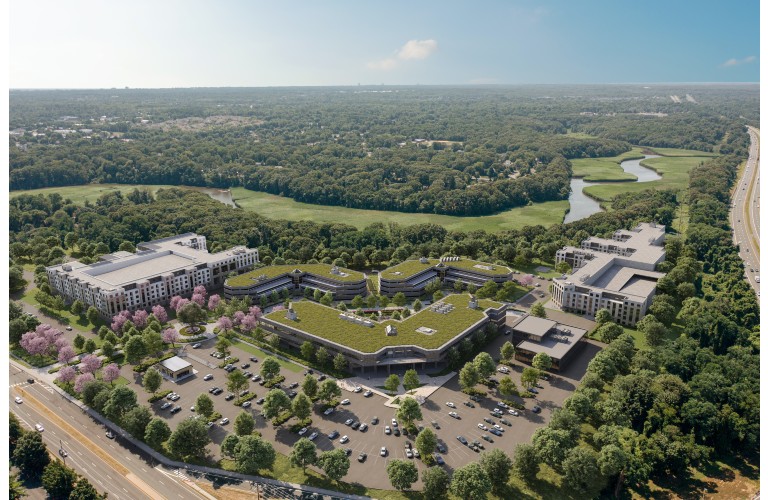 Newmark announced Wednesday that it has been selected as the exclusive office leasing agent for River Center at Red Bank – a six-building, 668,107-square-foot Class A office campus owned by Crown Realty and Paramount Realty that makes the undergone a major series of renovations.

“River Center is one of the largest office assets in the area, and we are deploying a significant amount of capital to revamp the property to create a campus-like setting that is more akin to a modern, landscaped tech campus. Silicon Valley,” said Maurice Zekaria, president of Paramount Realty. “We look forward to further solidifying this campus as an integral part of the community.”

Additionally, Paramount and Crown have committed more than $25 million to a capital improvement plan that will include a major overhaul of the complex’s north and south areas.

The property retained the services of architectural firm Blackey Hayes to reimagine the asset, bringing the feel of a West Coast tech campus to the East Coast. Improvements will begin with structural upgrades to the property to include new entrances, facades, enabled terraces, new HVAC system, roof upgrades, building management systems, new hallways, improved common areas and a new app for tenants to access property amenities.

The owner brought in landscape architects LRK and Ground Level to revamp the exteriors of the property and include a river walk that allows tenants to experience the adjacent Navesink River.

“Over the past few years, we’ve seen a major flight into quality for office users looking to move into modern, creative, serviced spaces,” Drummond said. “The start of the major overhaul of River Center will strengthen the centre’s ability to attract and retain some of the region’s best businesses.”

River Center is located along the Garden State Parkway at exit 109 and offers excellent visibility from vehicle traffic. It is near a four-way interchange including Route 520, Route 18, Route 35, and Route 195. River Center is also easily accessible via the New Jersey Transit and Academy bus lines with shuttle service free offered to tenants from Red Bank station.