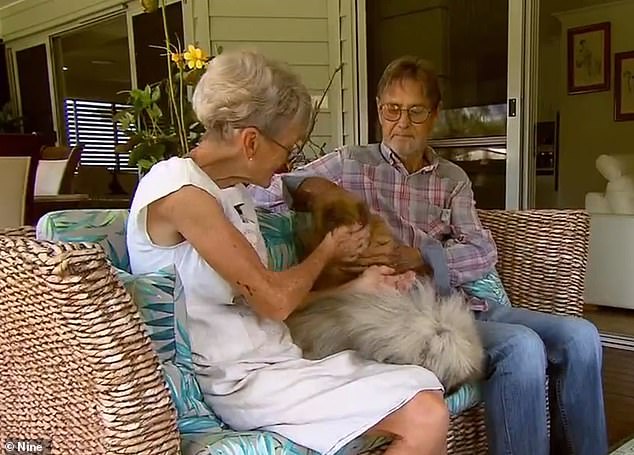 Harrowing story of how hackers stole $52,000 from grandparents by posing as the couple and stealing their house deposit

An elderly couple have spoken out after being scammed out of $52,000 by fraudsters who targeted their real estate agent.

Margaret and Pat Hailey of Browns Plains, Brisbane, had decided to sell their beloved family home after Ms Hailey battled breast and stomach cancer – which took away her entire stomach – and the transplant of Mr. Hailey’s kidney.

The couple had sold their house and were planning their move when they noticed a large sum of money was missing.

Scroll down for video

Margaret and Pat Hailey from Browns Plains, Brisbane, were victims of an email scam which saw $52,757 transferred from their home deposit to an unknown bank account in September

The couple immediately contacted their estate agent Philip Rsnikoff of Crafted Property to find out where their funds had gone.

The estate agent then told them he had received an email from Mr Hailey asking for the large sum to be transferred to an ANZ bank account.

He had transferred the money in good faith but Ms Hailey insists it is impossible that her husband sent the email.

Their estate agent said they received an email from Mr Hailey asking for the large sum to be transferred to an ANZ bank account.

Browns Plains Police began their investigation and found the most likely explanation for the email was that the couple had been hacked.

The Australian Cyber ​​Security Center issued a warning last year that all parties involved in real estate transactions were at risk of high profile scams.

“Cybercriminals are targeting all parties involved in the real estate industry, with a particular focus on impersonating lawyers who specialize in transferring property and communicating with their clients,” the statement said.

People who receive an email requesting large sums of money are recommended to call the sender and verify that they have requested the funds before the transfer.

Fortunately, after a six-month investigation, the bank was able to reverse the transaction and recover Mr. and Mrs. Hailey’s $52,757.

Fortunately, after a six-month investigation, the bank was able to reverse the transaction and recover Mr. and Mrs. Hailey’s $52,757.

Mr. and Mrs. Hailey have sworn never to use email again.