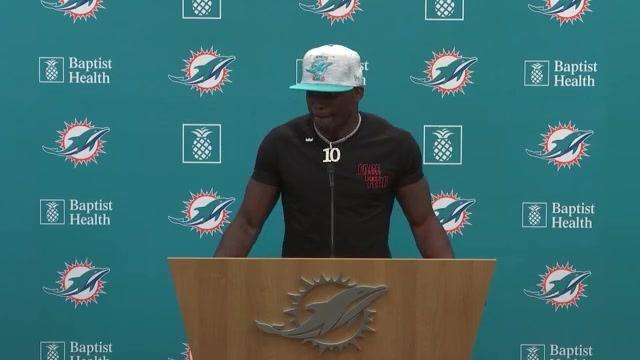 Goodbye to KC, hello to Miami

MIAMI — The Tyreek Hill show landed in Miami a day after the Chiefs agreed to trade the six-time Pro Bowler to the Dolphins.

The team held a press conference to introduce Hill to the Miami media and the Dolphins fan base.

Hill said the 24 hours had been crazy, but the decision was up to the family and securing their future. Plus, he said Miami was his home.

Hill said his family was thrilled with the move and was already looking for a property to call the city home.

They won’t have to worry about covering a mortgage when they move because the deal Hill signed would make him the highest-paid receiver in NFL history.

‘Fins up’: Tyreek Hill reaches out to Dolphins fans in new video

Hill said it was still hard to believe it happened.

“I tell people that all the time. There’s only been one time I cried in my life and that was when my daughter was born, man. So I almost cried, you know, like just having this moment. My agent wanted me to kiss him on the mouth. I said no,” Hill joked.

Even with the paycheck headed to the bank, Hill said leaving Kansas City and the Chiefs was a tough decision to make.

“He’s a badass, but uh, somebody comes to you with a lot of money and it changes. It changes. The feeling starts to change a little bit,” Hill said.

“He was definitely a tough man. Like I definitely had one of those times where I just had to like getting in my car and just driving and just really thinking about you know the times I had in KC, you know. With my family, with my coaches, my players and, as I even had a conversation with Pat.

“As he’s my brother for life, no matter what, and since we don’t even have to be on the same team, Pat, Kelce and a lot of other guys Dieter, Dr Rob, I can name a lot of guys. So I’m gonna miss those guys. I know those guys are still gonna play because they’re Hall of Famers, and they’re still gonna do their thing, and Coach Reid’s still gonna do his thing too,” Hill said.

He also took the time to thank Brett Veatch and Andy Reid for making the trade possible.

Now, Hill has said he’s ready to consider his future with the Dolphins. That includes meshing with fellow wide receiver Jaylen Waddle.

And for a moment, it was as if Hill had never left Kansas City.

“We’re going to do a few practice sessions, maybe even a race, man because good man, wherever I go, the Cheetah is always going to prove he’s the fastest on the team no matter what. I mean that,” Hill said.

Whatever happens when the new NFL season kicks off later this year, Hill said Dolphins fans better be ready and they better show up to see the team play.

After everything that happened, Hill said he was happy, and that’s what matters.

“I’m just grateful to be where I am today. You know, so everything happens for a reason. You know God has blessed me and my family with this great opportunity, so you know that’s what we’re looking at right now. We can’t wait,” Hill said.

You can listen to the entire press conference in the video player at the top of the page.

📲 Download the FOX4 News app to stay informed on the go.
📧 Sign up for FOX4 email alerts to get the latest news delivered to your inbox.
💻 Find today’s top stories at fox4kc.com for Kansas City and all of Kansas and Missouri.