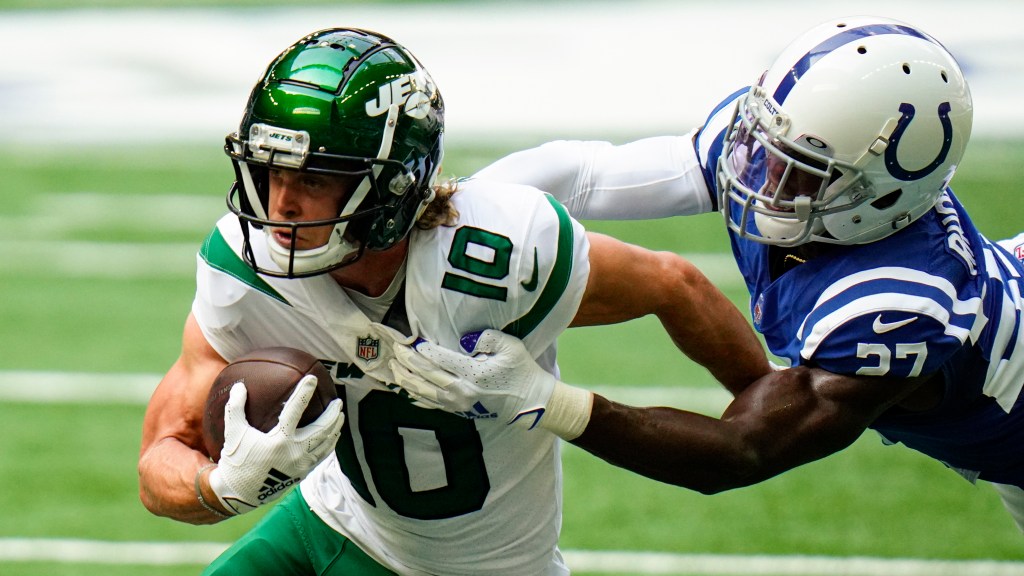 Braxton Berrios’ impending free agency will be one of the Jets’ biggest storylines this offseason.

Berrios was arguably the Jets’ third most important player in 2021 behind Elijah Moore and Michael Carter, and he was certainly their biggest scoring threat over the last three games. Berrios influenced the game on the ground, in the air and on special teams. He finished the season with 471 offensive scrimmage yards, four offensive touchdowns, 852 kick return yards, and one kick return touchdown.

So what could the Jets offer Berrios if they want to keep him? What could another team offer in free agency?

That’s a tough question to answer given Berrios’ unique usage. Despite being an All-Pro kick returner, these types of players rarely break the bank. His receiving and rushing numbers have also not been otherworldly throughout his career. Altogether, though, Berrios brings a ton to the table, and he could do even more as a starting slot receiver. Jets starter Jamison Crowder will also be a free agent.

All of this creates a wide range for Berrios’ next contract. He could earn as much as Cole Beasley due to his speed and slots skills, or as low as some of the league’s top returners.

Let’s look at a few existing contracts that might help determine the market for Berrios.

It would be a good compromise for Berrios if the Jets don’t want to break the bank or commit to Berrios for four years. Bourne was a slightly better receiving threat than Berrios before winning his contract with the Patriots. Bourne caught 79 balls for 1,025 yards and seven touchdowns in 2019-20, compared to Berrios’ 83 receptions for 825 yards and five touchdowns in 2020-21. But Bourne doesn’t have the rushing or special teams ability that Berrios possesses.

Now with the Bears, Grant earned a big deal with the Dolphins in 2019 thanks to his game-breaking ability on special teams and his overall speed. He averaged 25.1 yards per punt return from 2016-18 but played sparingly in the receiving game. Berrios has a strong case for this deal considering he’s been a bigger pass-catching threat than Grant and a better return specialist.

Like Grant, Agnew is a big return specialist with average reception numbers at best. He’s averaged 25.3 yards per punt return since 2017, but only started catching passes this season with the Jaguars. Berrios’ return yards and offensive yards this season are better; a deal like Agnew’s would be less good.-