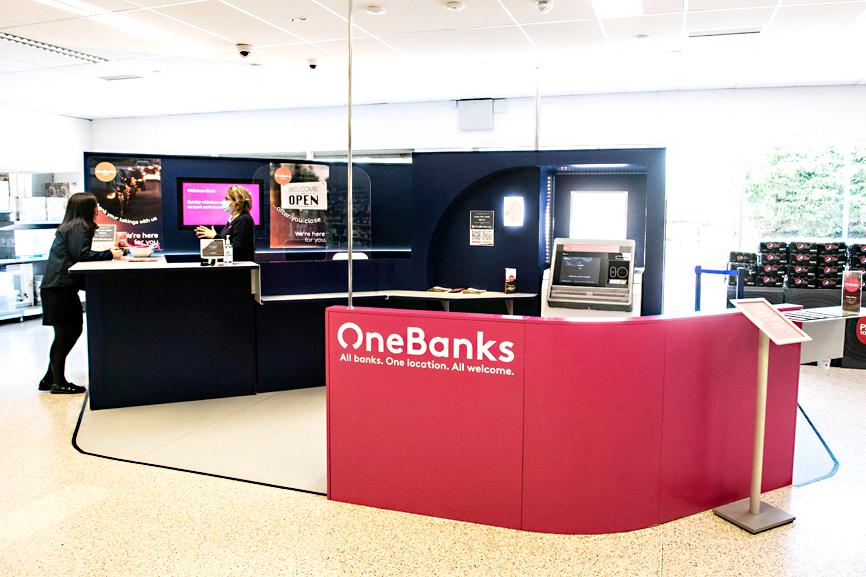 Donna Corrigan walks into her local supermarket to visit OneBanks, laden with a heavy box of coins to deposit into her bank account.

After its last bank branch closed in 2018, the Scottish town of Denny welcomed a high-tech start-up offering day-to-day banking services within the town’s cooperative grocery store.

The kiosk offers Denny’s 8,000 residents an alternative to traditional bank branches after the rise of online banking services allowed lenders battered by the global financial crisis more than a decade ago to cut costs by closing branches for good. points of sale.

This trend continues in large numbers.

OneBanks, which has raised about 5 million pounds ($6.5 million) from various investors, acts as an intermediary between more than 30 banks and their customers.

The OneBanks kiosk “can do it all – it’s like a regular bank to me,” said Corrigan, 40. “I’m not a business, I’m just a normal customer who just wants to withdraw money. So it’s useful for me.

Behind the counter, a staff member drops loose change into a counting machine while chatting.

OneBanks gives customers physical access to banking services for free. Banks subscribe to the start-up’s services to connect with their customers.

Customers can deposit or withdraw money and pay bills, while advisors provide assistance for the less tech-savvy.

The demise of Denny Banks left residents 20 minutes’ drive from the nearest branches in Cumbernauld, Falkirk or Stirling near Glasgow.

British consumer group Which? predicted that around 5,000 UK bank branches, around half of the total, would have disappeared between 2015 and this year, with Scotland being the most affected.

Large swathes of the UK population remain dependent on cash, despite the growing popularity of internet use and contactless payments during the pandemic.

The charity Royal Society of Arts has estimated that nearly 20% of Britons – particularly older people and those in rural areas – would struggle to get by without money.

Yet in Denny’s neighboring town of Bridge of Allan, there is no branch in sight.

“Many of our customers prefer to pay cash to keep tabs on what they are spending,” she added.

“As an older generation, you get used to some changes, but I also enjoyed the person-to-person contact within the bank,” he said. “Now things have become cold and sterile.”

OneBanks hopes to change that by planning to roll out around 15 more bank kiosks in the UK by the end of the year, in addition to the three it has in Scotland.

The group also has international ambitions.

“The problem that banks have — in terms of needing to close branches but also needing to have some kind of physical presence — is a global problem, and so I really see OneBanks as a global solution,” Duncan said, Founder and CEO of OneBanks. said Cockburn.

The wider UK financial sector is struggling to solve the problem.

The industry has tested a number of options, including OneBanks kiosks.

It also wants to improve post office facilities and has been testing banking hub services with lenders.

Comments will be moderated. Keep comments relevant to the article. Remarks containing abusive and obscene language, personal attacks of any kind or promotion will be removed and the user banned. The final decision will be at the discretion of The Taipei Times.